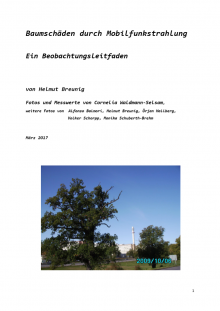 The observation guide presented here is meant to encourage independent observations and documentations of trees and any damage they may sustain through exposure to radiofrequency radiation. It builds on the work and foundational findings of BERNATZKY, BALMORI, SCHORPP, HALLBERG, WALDMANNSELSAM, and others.

In light of the increasingly visible consequences of climate change, the continuation of their work is an important step toward forming an independent judgment. This is all the more important since the observations described here will take extra efforts — especially in view of the massive climatic changes — to ensure that this issue is not denied the scientific recognition by the established research community it deserves.

This call for research is based on the reasonable suspicion suggesting an association between health symptoms in humans and damage in trees at locations in the line of sight of mobile phone base stations, which was pointed out by EGER and WALDMANN-SELSAM.

As stationary and perennial living organisms, trees are well suited for studying the question as to whether radiofrequency emissions from phone masts may cause damage in plants. The observation guide is designed to help observers recognize visible crown damage in free-standing trees exposed to radiofrequency radiation. The photos show typical damage patterns and thus can sharpen the observer’s eye. Based on this observation guide, scientists and laypersons alike can systematically observe trees in their immediate living environment or in other regions when they travel.

In urban areas, it is not uncommon that trees are located within the exposure area of different phone masts from multiple directions. In crowns of free-standing (solitary) trees, which are exposed to RF radiation from one side only, it is rather easy to show the signs that may indicate a possible exposure to RF radiation. Advanced stages of sustained damage are best suited for describing the typical characteristics. This is also how the examples for this observation guide have been selected. The majority of the examples are deciduous trees.

Based on the analysis of advanced patterns of damage and their development, general characteristics for the crown damage in exposure areas of RF transmitters can be derived, which, in turn, can help recognize damage in trees with a less advanced stage and under conditions where the exposure occurs from multiple directions.