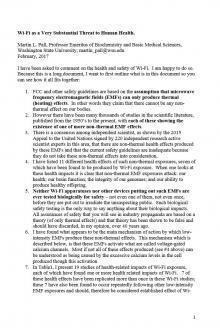 Wi-Fi as a Very Substantial Threat to Human Health.

Wi-Fi May Be Particularly Damaging to Young People:

Most arguments that have been made that microwave frequency EMFs may be much more damaging to young children have centered on the much smaller skulls and skull thickness in young children, increasing the exposure of their brains to EMFs.

However here a second such argument to be made. EMFs have been shown to be particularly active in producing effects on embryonic stem cells  [28, 30-40]. Because such stem cells are much more common in children, with stem cell densities the highest in the fetus and decreasing with increasing age [30,31], impacts on young children are likely to be much higher than in adults.

It follows from these various findings that the placement of Wi-Fi into schools around the country may well be a high level threat the health of our children as well being a threat to teachers and any fetuses teachers may be carrying, as well.