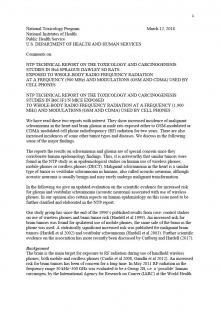 Keywords for this documentation:
RF radiation and cancer  |  State of research
Comment on a study
Go to EMF:data assessment

Comments on NTP Technical Report on the Toxicology and Carcinogenesis Studies.

Comments on:
NTP TECHNICAL REPORT ON THE TOXICOLOGY AND CARCINOGENESIS STUDIES IN Hsd:SPRAGUE DAWLEY SD RATS EXPOSED TO WHOLE-BODY RADIO FREQUENCY RADIATION AT A FREQUENCY (900 MHz) AND MODULATIONS (GSM AND CDMA) USED BY CELL PHONES.

NTP TECHNICAL REPORT ON THE TOXICOLOGY AND CARCINOGENESIS STUDIES IN B6C3F1/N MICE EXPOSED TO WHOLE-BODY RADIO FREQUENCY RADIATION AT A FREQUENCY (1,900 MHz) AND MODULATIONS (GSM AND CDMA) USED BY CELL PHONES.

(...) In the following we give an updated evaluation on the scientific evidence for increased risk for glioma and vestibular schwannoma (acoustic neuroma) associated with use of wireless phones. In our opinion also certain aspects on human epidemiology on this issue need to be further clarified and elaborated in the NTP report.

Based on case-control studies there is a consistent finding of increased risk for glioma and acoustic neuroma associated with use of mobile phones. Similar results are found for cordless phones in the Hardell group studies. These results are supported by the results in the NTP animal study (https://ntp.niehs.nih.gov/ntp/about_ntp/trpanel/2018/march/tr595peerdraft.pdf, https://ntp.niehs.nih.gov/ntp/about_ntp/trpanel/2018/march/tr596peerdraft.pdf). Malignant vestibular schwannoma is a similar tumor type as acoustic neuroma, also called vestibular schwannoma.

The findings are less consistent for meningioma although somewhat increased risk was seen in the meta-analysis of ipsilateral mobile phone use. A longer follow-up time is necessary for this type of slow growing tumor.

One mechanism in carcinogenesis could be oxidative stress with production of reactive oxygen species (ROS) as summarised by Yakymenko et al (2016). This could be an indirect mechanism for the increased brain and head tumor risk (Megha et al 2015) since ROS may give DNA damage.

By now carcinogenicity has been shown in human epidemiological studies replicated in animal studies. Laboratory studies on RF radiation have shown increased ROS production that can cause DNA strand brakes. We published in 2013 the conclusion that RF radiation should be regarded as a human carcinogen Group 1 according to IARC definition, based on scientific evidence (Hardell, Carlberg 2013b) further supported in our up-dated article (Carlberg, Hardell 2017). That conclusion is reinforced by the current evaluation.